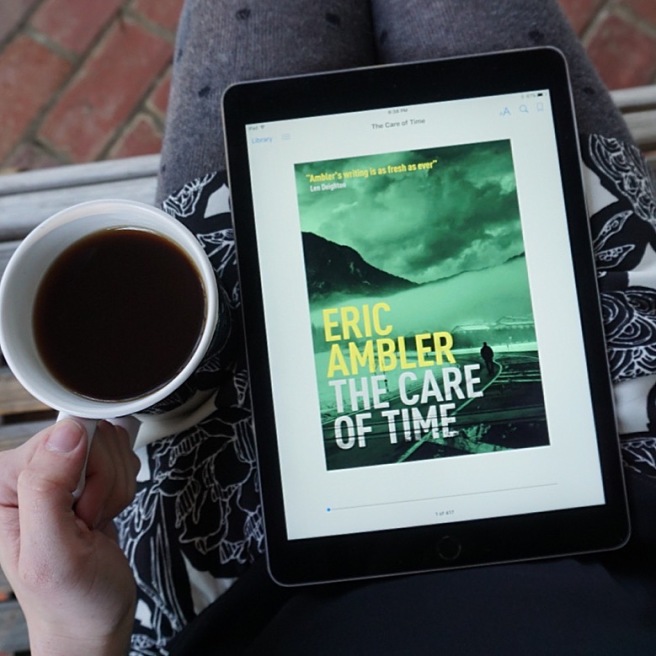 What I find remarkable about Eric Ambler’s writing is his ability to fuse the intrigue of a thriller with the conviction of a political manifesto. In his final spy novel, The Care of Time (originally published in 1981; now reissued digitally by Ipso Books) he does so, however, with mixed results.

Editor Bob Halliday’s new contract begins with a bang when he receives a bomb threat followed by an actual, albeit already defused, bomb from Karliss Zander, a known terrorist middleman seeking Halliday’s assistance. With this bluff of violence, Zander lures Halliday to Italy under the pretense of ghostwriting a book that will be part memoir of 19th-century anarchist Sergey Nechayev (the inspiration for Dostoyevski’s The Possessed) and part expose of government corruption that benefits from covertly backing terrorist organizations. Zander’s true intention, however, is to use Halliday as a pawn in negotiations between NATO, the CIA, and an Arab prince known only as “the Ruler, who will allow NATO to build a military base in the Persian Gulf in exchange for permission to found a health clinic in Austria. Through this mediation, a second cover story evolves in which Halliday, Zander, and his associates pose as a television crew to interview the Ruler about the plans for said clinic in an attempt to reveal his true motivations for seeking refuge in Austria.

The Care of Time has all the hallmarks of an Ambler thriller — a protagonist trapped by his situation, fantastic journeys of flight and pursuit, and a narrative layered with falsehoods — yet the pacing of the novel’s second half suffers from lengthy and sometimes convoluted dialogue as information passes among parties and overly detailed exposition of the television set-up storyline. Where Ambler excels is in the first 100 pages in which he uses Zander’s bomb threat to assess the history of terrorist philosophy. In conversation with previous espionage works, Ambler recalls the first wave of anarchism featured in Conrad’s The Secret Agent before denouncing the bureaucratic back-room deals that fuel and finance the second wave of terrorism. Had Ambler continued this thread, The Care of Time would be on par with his earlier works that reinvigorated the espionage genre. Instead, the novel feels like the embodiment of Zander himself, a worn, world-weary intelligence agent for whom the spy game has gone on too long. The novel may not appeal to fans of contemporary fast-paced techno thrillers, but those interested in the more cerebral strain of classic spy fiction will appreciate Ambler’s overview of the transitory end of the Cold War and the onset of the new age of terror.